Wheeler Peak and the Mayor of Taos Ski Valley

“The wind’s blowing at sixty miles an hour up there,” the Mayor of Taos Ski Valley  told the women at the Village’s sole Fire Department station, a message the women relayed to us. We were deep in the heart of Carson National forest. We’d come with one goal in mind: to conquer Wheeler Peak, at 13,161 feet the highest point in New Mexico.

Let’s backtrack a bit here. A day before we were chilling at The Big Texan Steak Ranch, a Route 66 attraction whose claim to fame were  free 72 oz. steaks (free, provided that you finished the steak, a salad, a baked potato, ranch beans, shrimp cocktail, and a dinner roll, all in less than an hour… those who failed had to pay $72). Our next planned destination was Mesa, Arizona, where we planned to go tubing at Salt River with some friends during Memorial Day weekend. But we had a couple days to spare until then. Naturally, we Googled up the tallest mountain in NM and decided to use our spare time to climb it. No big deal, just another Peak to bag on the way, we thought.

Fast forward back to the Fire station. We had stopped there to find more information on how to get up to Wheeler Peak. There we found a trio of lovely ladies, who were more than happy to give us all the information we needed- plus a fair share of motherly words of caution.

Suddenly the door opened and the Mayor strolled in. Here was the Mayor in all his glory: grey white hair, amiable smile, plain blue t-shirt and khaki shorts. Instead of a belt, the Mayor wore a black threaded strap around his khaki belt loops, a strap that also held a walkie-talkie. As he looked us over, one of the lovely ladies behind him put up seven fingers. “Seventy years old,” she mouthed. Another lady wrote, “The mayor goes hiking all the time. Three times a month he goes up Wheeler Peak.”

The wise mayor pointed out all the reasons we shouldn’t go up Wheeler:  May was too early, the wind was really a-gusting today, and the snow (“up to your hips” one of the ladies gestured) still covered most of the trail- we wouldn’t be able to find our way up the mountain. After some contemplation and a brief discussion with his three female co-workers, he came up with a suggestion. Hike up to Williams Lake, about a couple miles away. From there, if we found the trail easy enough to follow, we could take another trail that led up to Wheeler Peak.

Heading up to Williams Lake, we shared the trail with none but the wind, the trees, and the snow. For the past day, we’d driven to Taos through the seemingly never-ending desert. Stretched for miles around, we could only see sand, plateaus, short scrub brushes, and the scorching sun. Indeed, on I-40 I saw the first tumbleweed I’d ever seen. But here in Carson National Forest, we were in a pocket, a bubble of stunning natural beauty. The surroundings invoked in us images of Colorado and Alaska, the snow-covered wilderness.

The night before, we camped beneath pine trees by a creek. The water in the creek cascaded over rocks nearby, creating a continuous dull roar. It was the best camping spot we had so far, and as I lay in my sleeping bag that night the rhythmic roar of the creek cradled me to sleep, like a mother stroking a baby’s back. 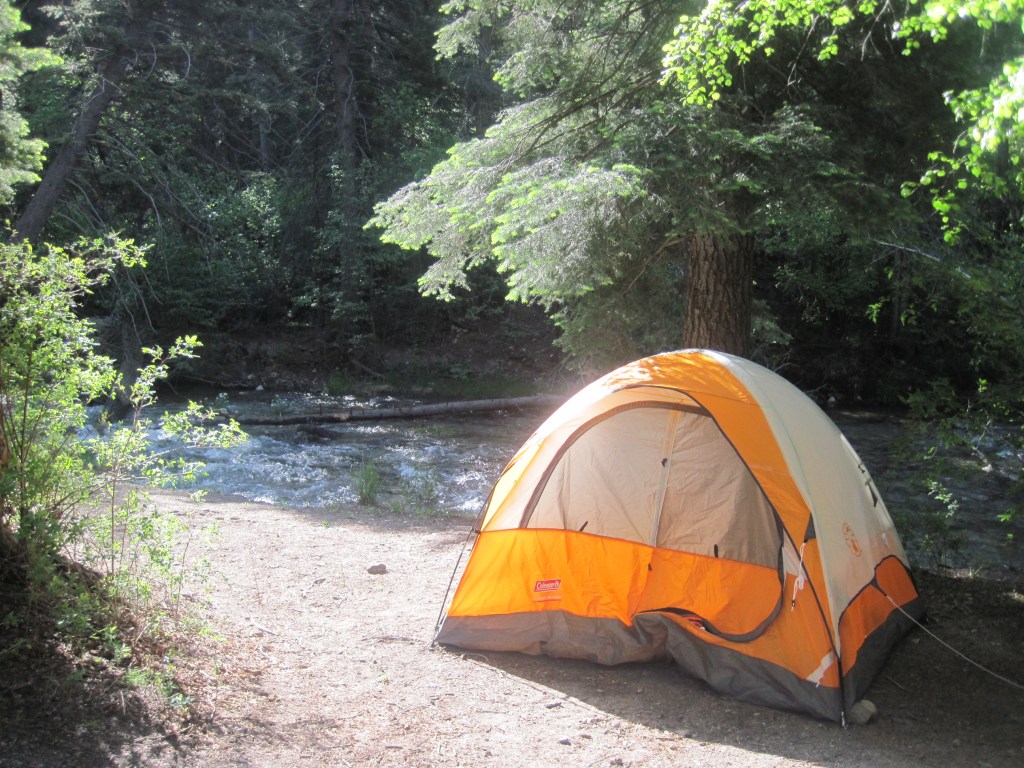 The idyllic spot we camped in, near the creek.

On the trail, we passed by another creek by an abandoned ski lift, closed for the summer. The creek passed over a waterfall, coursing down the mountain. But as we entered the wooded area, we met the biggest hiking adversary thus far: snow. Preserved late into the month of May by the shade of the trees, the snow lay on the trail in layers two, three, sometimes even four feet thick, almost untouched by human feet. We trudged through, me in my cutoff shirt and shorts—despite the snow it was warm enough to be a mid-summer day in Minnesota. 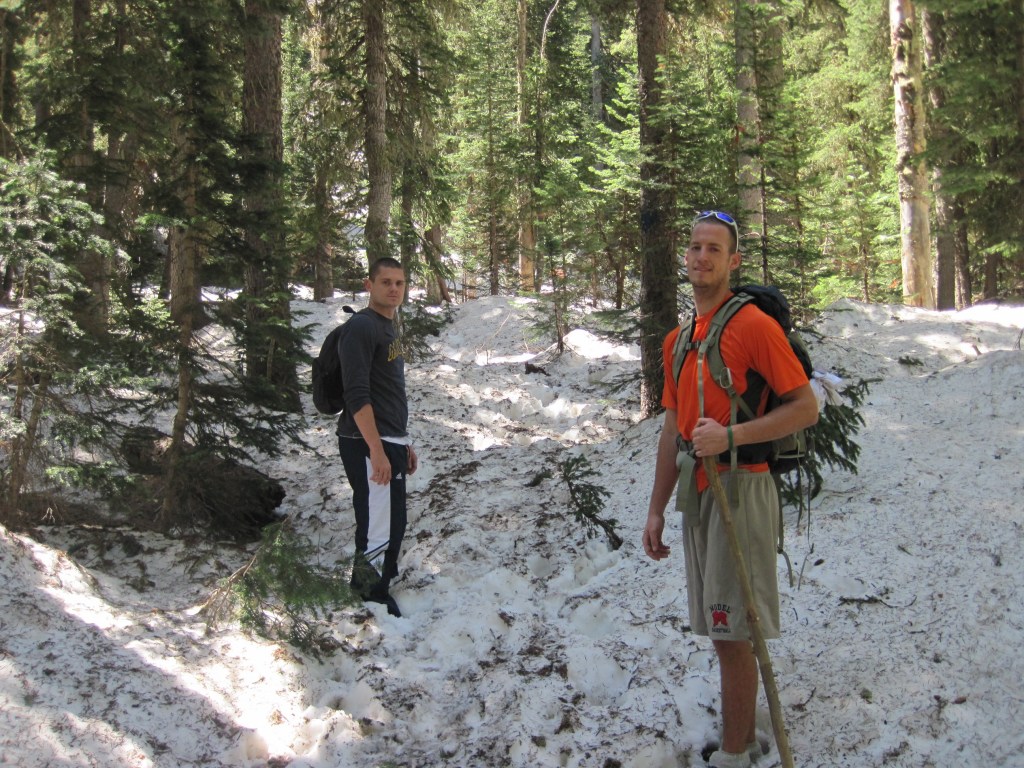 Scott and Kevin in knee-deep snow

We braced the snow, which covered the trail almost the entire way to Williams Lake. We rested at the lake, marveling at the snow covered peaks that surrounded the crater-like lake. To the west we could see Wheeler Peak, its snowless face peering down at us. 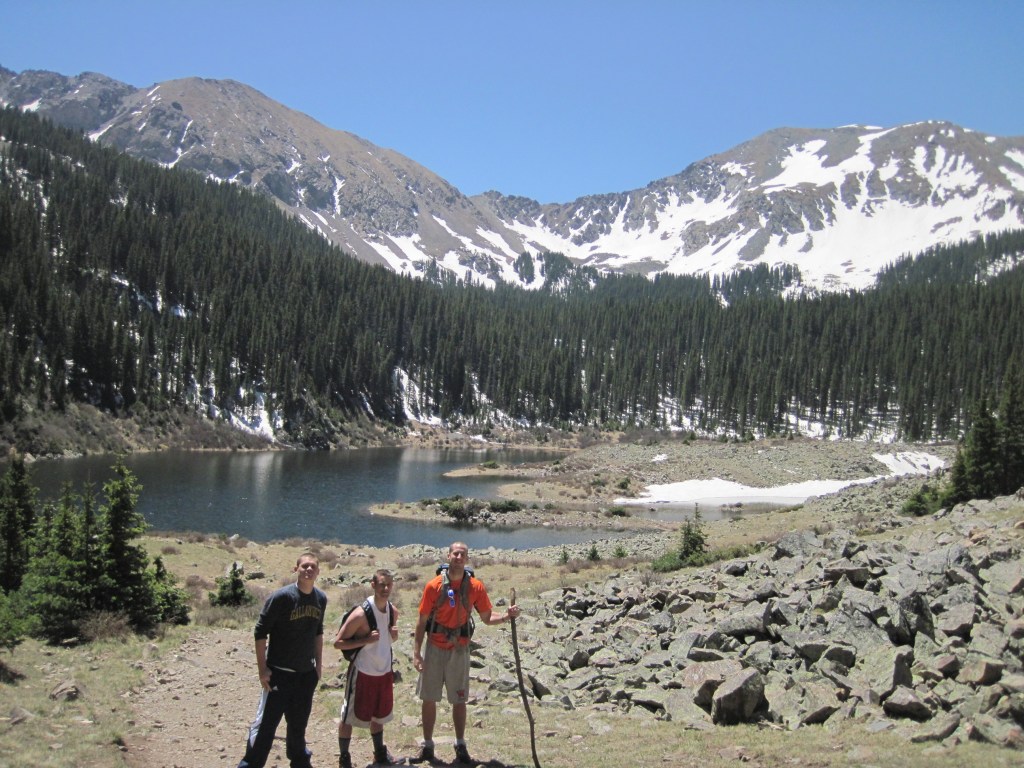 Williams Lake (Wheeler Peak is off to the left, not pictured)

We are three college-aged boys, with a healthy amount of cockiness stored in our beings. I said, “This hasn’t been so bad. The Peak’s right up there. This is easier than LeConte was (see Kevin’s previous entry on LeConte).”

On the way up to Wheeler Peak, we endured more snow-covered ground. But once we got past the tree line, the snow disappeared, and we were faced with the last couple miles of trail crisscrossing up Wheeler’s rocky summit.

The air gets thin, real thin at 12, 13,000 feet. A simple 100-yard ascent becomes quite an ordeal when your body cannot refill your lungs with sufficient oxygen. The sensation is oddly similar to the one you get when blowing up a balloon. As you push air out of your lungs and into the balloon, the shortness of breath leaves you lightheaded. It’s a brief, mild sort of high. Now take that lightheadedness, and imagine it multiplied by three or four. As we staggered up Wheeler Peak, my mind was positively floating. I couldn’t keep my mind on one thing, and my hunger seemed insatiable. My mind distanced from my body, and it felt like someone else was taking each step for me, carrying me forward. Worst of all, I felt like I could go right to sleep up there on Wheeler.

But we pushed on, one stretch of mountainous trail at a time. When we finally got to the ridge, a few hundred feet from the peak, the wind just about blew us off the trail. The wind plowed through us, unrelenting. If I’d only opened my jacket zipper, I would have blown off Wheeler like a kite, floating as high as my mind was. Instead we hunched our backs and nearly crawled the last stretch.

At this point, I was realizing, sadly, that my hubris had badly underestimated the highest point in New Mexico. The altitude, the wind, the rocks that scattered with each step… Wheeler had seen our arrogance and raised the bet, and we suffered the consequences.

On the very summit, 13.161 feet up, we shared the moment with a sixty-something year old New Yorker. With his brother, he was on a quest to conquer each of the fifty states’ highest points. Wheeler Peak was #35 on his list. We ate our sandwiches with our backs hunched against the wind, which blew at 65 MPH, the New Yorker said. 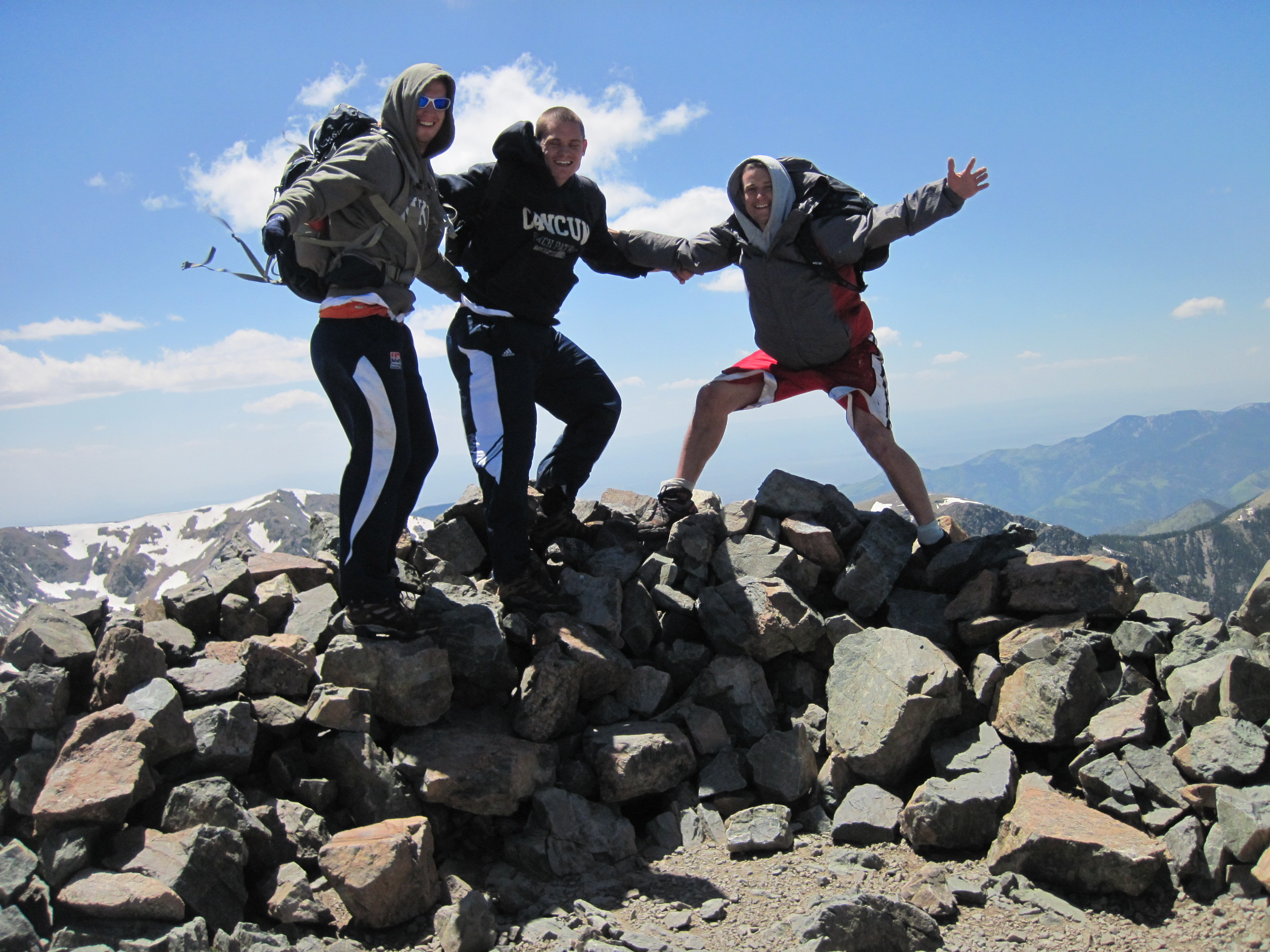 The wind blows heavily at the highest point of New Mexico.

The descent was brief and easy. Always on the ascent it seems like it’ll take forever, but coming back down the whole trek felt as if it passed during the blink of an eye.  It’s a sensation which is true of many things in life, I suppose. When the going gets tough, time seems to stand still, stretching the agony on and on.  But just when the tough gets going, the time suddenly picks itself up and runs even faster than you ever thought it could.

Back down from Wheeler Peak, we stopped by the Fire station again. The Mayor wasn’t in, so we left a message explaining our day’s exploits. A day later, he responded with this: