An invasive weed called Canadian Thistle is propagating rapidly in Taos Ski Valley.  This short-lived perennial will spread considerably if not controlled, and could damage the flora of the valley.

According to Rey Torres, the County Extension Agent, persistence is the key in eradicating Canadian Thistle.  It is best to attack the weed while it is still young.  By the time the purple flower of the thistle appears, the root system of this plant is already established and can be 6 feet deep.  Since the depth of the roots makes it difficult to dig up, the homeowner should either cut or mow down the plant to starve the root system and then remove the plant from their premises.  If cut at the base of the stalk, the plant will shoot nodes producing a new stalk. After a period of cutting back the plant, it will eventually die off.  It is during the plant’s second year of growth that a rose head and seed stalk will start to appear.  While the flower is still purple, the flower matures and creates white seeds which spread the growth of the plant.

Chemical control can be used.  Water the weed first, and then two days later spray with a solution of either Round Up or 2,4-D (like Weed Be Gone). The pre-mixed store bought solutions should not be used, rather a concentrate which can then be mixed to 2 Tablespoons concentrate to 1 gallon of water. Spot spray the weed as much as possible, and try to get it at a young age. It is best to try spraying in the springtime and removing the plant.  After several rounds of spraying and removing, the root system will be starved and the plant should not reappear.

Here are some pictures of the Canadian Thistle for your information: 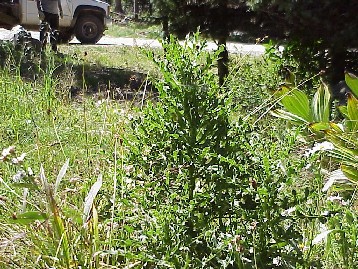 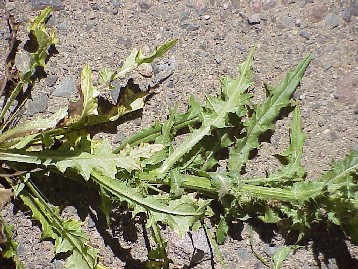