↓
Home→How Do I …?→Learn about …→Village History 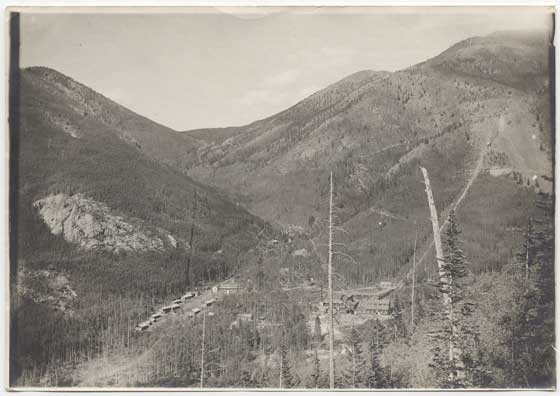 The Village of Taos Ski Valley’s early beginnings are based in mining. In the late 1600’s, the Spanish mined the area until they were unable to extract any more ore.  With new mining methods arising in the early 1900’s, the area was re-opened to industries. During this time, the Rio Hondo district was advertised for the mining of timber and ore (gold and copper) and as early as 1905, the American Consolidated Mines Company, Fraser Mountain Company, and San Cristobal Company were in operation. Mining continued to be the primary activity in the Village until 1906 when it dwindled due to weather limitations. 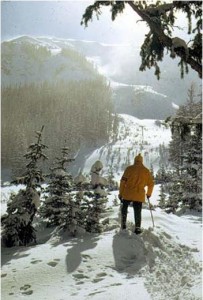 Shortly after World War II, Orville E. Pattison purchased land east of the Lake Fork reach of the Hondo River. The Pattison family still owns a large area of the Village of Taos Ski Valley.  In the mid-1950’s, Ernie Blake arrived in the valley and developed the ski business, which created a demand for home sites and lodging. The Pattisons recognized this demand and began subdividing portions of their property into residential and commercial lots for sale.  In the 1960’s, they began to develop the lower village, by selling and leasing lots for homes in the core commercial area.  In the early 1970’s this group purchased water rights downstream and transferred them for consumption in the Ski Valley and worked with the Ski Valley Corporation (TSV) to develop Kachina Village. The Pattisons have continued to be involved in the development of the Village through present day.

Ernie Blake initiated the development of what is now Taos Ski Valley Resort in 1955.  The first lift was installed in 1956, and in 1957 the first run was opened in the location of what is now the Snakedance run. In the fall of 1957, a Poma (“platter”) lift went up Al’s Run and ended where the Tower 8 of Lift One is now. Today, TSV is one of the premier ski resorts in America and remains one of the few family-owned and operated resorts in North America.

Finally, the Village was incorporated into a municipality during 1996, pushing it forward as one of the premier multi-season resort destinations in New Mexico and North America.

The Village of Taos Ski Valley is located within the Carson National Forest, with the Wheeler Peak Wilderness area bordering much of the Village on the south. Wheeler Peak, located within the Wilderness Area, is the highest peak in New Mexico (Elevation 13,161) and is located approximately 1 ½ miles south of the Village boundary. Other nearby premier natural attractions includes Williams, Horseshoe, and Lost Lakes. In fact, the Williams Lake Trail is the most popular trail in the entire state of New Mexico drawing many visitors to the Village during all months. North and west of the Village is the Columbine-Hondo Wilderness Study Area. Recreation opportunities in the forest include fishing, hunting, camping, and hiking. Winter activities include snowshoeing, snowmobiling, skiing, and snowboarding at the Taos Ski Valley, which has operated on Forest Service land under a special use permit since 1955.

The steepness of the Valley’s narrow developable area provides a close interface with the natural environment and the Valley’s diverse terrain varies from riparian habitat to alpine tundra. These habitats include over 250 different plant species, and a plethora of animals that make these mountains and valleys home. It is this diversity of plant and animal life that greatly contributes to the beauty and uniqueness of this area.

Taos Pueblo Reservation is located less that two miles south of the Village, adjoining the Wheeler Peak Wilderness area boundary. The Pueblo was represented though out the planning process. During this process, the Pueblo voiced concerns that as the Village grows, and recreational use in the Wheeler Peak Wilderness increases, it will continue to experience a growth in trespassing and other unwanted impacts on Reservation land and the water quality of the Rio Hondo.

Taos Ski Valley offers over 1,195 skiable acres in the Carson National Forest with an average annual snowfall of 305’’. There are 110 trails with 24% beginner, 25% intermediate, and 51% expert terrain. Taos Ski Valley has 12 lifts with a 2’612’ lift serviced vertical drop or 3,244 vertical drop with the Kachina Peak hike.

Land Use, Infrastructure, and Development

The town of Taos is located approximately 19 miles southwest of the Village of Taos Ski Valley along State Route 64. The greater Taos area includes the Taos Airport, Arroyo Seco, Valdez, and the Taos Pueblo;  all of which are located between Taos Ski Valley and the Town of Taos. These small communities, like the Village and Town of Taos, are experiencing growth and increases in traffic.

In 1971, a Comprehensive Plan for the Twining – Amizette area, prepared by The Architects, Taos, was presented to the Taos County Commission. Although the plan was not adopted by the County, the research and participation by members of the community helped to formalize the beginnings of a unified approach to the future development of the area, serving as an important basis for the work done by the Planning and Zoning Commission in the preparation of this comprehensive plan.

Historically, the Village has approved land use plans based on its zoning ordinance and on an incremental basis. While this approach was appropriate to the Village when development was not tied to common infrastructure or fire and emergency services, the number of transient and residential units has increased. This has further challenged the Village in meeting the demands of providing quality infrastructure and services to the citizens of VTSV and its visitors as well as ensuring that the new development preserves and does not degrade the quality of the built and natural environment.

Currently, the Village encompasses 2.36 square miles. The base elevation of the village is 9,207 feet.  The Kachina area is located at approximately 10,200 feet. Over the past decade, approximately two new single-family residences a year have been constructed. The Village’s Full time population totals 69 residents. When all transient units are fully occupied, the Village’s full and part-time population is approximately 4000+ residents.) The Village provides public safety, water, and sanitation. Fire and Emergency Services are staffed by volunteers and provided by the Village.

The original area was the Amizette Subdivision, developed in the narrow canyon along both sides of the S.R. 150 and the Rio Hondo. Currently this area is predominantly residential and hotel use.

The Kachina Area is located at the base of the Kachina lift, and includes the Blue Jay Ridge lots. This area is at 10,200 feet and includes the Kachina Wetlands. Current development includes the Bavarian Restaurant and Lodge, the Wheeler Peak Condominiums, and a residential unit currently completed. The potential for development in this area, established initially by the increased lodging capacities has resulted in significant request for retail and commercial development in this area. The Village, given its current wastewater treatment capacity, may not be able to accommodate a majority of these new requests in the future.  There is also a concern about traffic flow along Twining Road that would occur as a result of the development of this area.

The Village had a vehicular and pedestrian circulation study conducted by a private consulting firm. This study and the other inputs to the Planning & Zoning Commission resulted in the adoption of a 20-year Capital Improvement Plan. This Plan addresses the proposed improvements on a 5, 10, and 20 year planning period.

The Ski Valley Corporation permits hiking along the Rubezahl Return Trail during the off-season. This trail provides a connection between the Village Core and the Kachina Area.  Other hiking/pedestrian trails within the Village include the J.R. Memorial Trail. This trail is envisioned as a central spine of the Village pedestrian network. The existing TSV Rubezahl Return Trail and the Williams Lake Trail provide a continuous pedestrian connection that extends the full length of the Village. The Village envisions that pedestrians and hikers would be able to access the trail from numerous points; connecting parks, trailheads, and resort destinations throughout the Village.